November 13, 2014 Comments Off on Good times for Goodfellows In The News 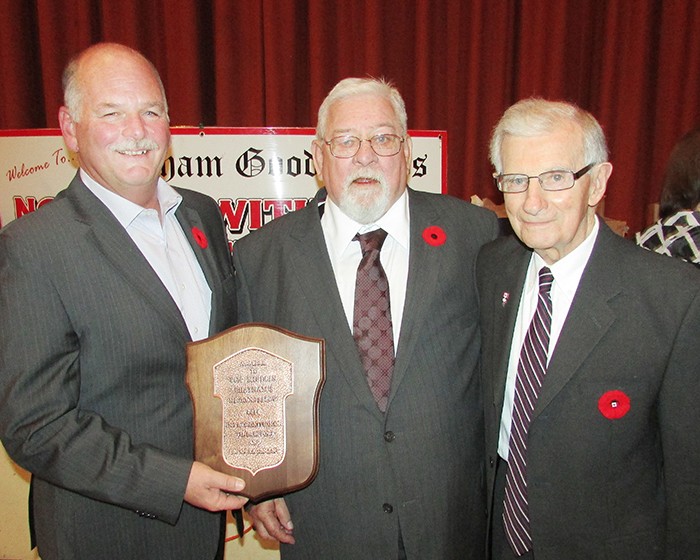 It was as much a family reunion as it was a celebration of 60 years of community service as the Chatham Goodfellows gathered at St. Joseph Parish Centre last Thursday evening to kick off the 2014 campaign.

The evening was an emotional one as more than 200 people listened to stories from those who have helped in the campaign and those who have been helped by it.

Mary Williston, whose family name has been synonymous with the Goodfellows since 1959, spoke about how the organization has been a tradition through four generations.

“My first date with (husband) Phil was to go to the Scout hut and paint little red wagons for the Goodfellows,” she said.

That date led to a marriage of more than 50 years and an equally long challenge of fulfilling the Goodfellows’ goal of “no child without a Christmas.”

“If you ever doubt that one person can make a difference, Phil is the reason that our children, grandchildren and great grandchildren are involved,” she said. “We aren’t alone; there are many families who have been and continue to be involved because they have a passion for the cause.” Williston family members from each generation (including Phil and Mary’s son Scott, the current president) spoke of their involvement.

“The kids and their kids all know that this is what happens at Christmas,” she said. “It doesn’t seem like Christmas until we’ve helped the campaign.”

Dana Lovell spoke to the crowd about how her father’s family was helped by Goodfellows decades ago when he was one of nine children.

As a result of that, her children and those of her siblings donate money each year to help the program.

“You have a lifetime donation from my family to the Goodfellows.”

One of the people present Thursday night was Don Strong, an original Goodfellow from 1954. Now 90 years old and living in Windsor, he recalled how the Chatham group modeled itself after the Windsor Goodfellows.

Strong said on more than one occasion, Henry Ford II came through with funds to help the fledgling organization meet its goal.

“As far as I remember, it was never made public but Mr. Ford was a great supporter of us when we needed it,” he said.

Strong said he never believed the Goodfellows would still be needed 60 years later, but he’s glad the group is still prepared to help.

Chatham-Kent-Essex MP Rick Nicholls brought official recognition from the province and a few memories of his own. “I can remember how cold it was on the street corner selling the Goodfellows newspaper,” he said.

The reward, he said, was a stop inside the Goodfellows trailer on King Street where there was hot Vernors Ginger Ale.

Chatham-Kent Mayor Randy Hope praised Goodfellows for putting smiles on the faces of children each Christmas for decades.

Tim Mifflin, a former inspector with the Chatham Kent Police Services and a 34-year veteran of the organization was named Mr. Goodfellow for 2014. Mifflin said his predecessors have left him a strong legacy.

“We concentrate on the fundamentals,” he said. “It’s an incredible amount of work do get done in a short period of time, but due to so many volunteers, we get it done.”

He said the strength of the fully volunteer organization is involvement from students through retirees.

“We’re fortunate to have strong relationships with the school boards. Students are aware of what we do and why we do that so it’s really taught from an early age.”

From helping 100 families at its inception, the group now provides Christmas food and toy baskets to 1,400 families in Chatham immediate surrounding area. Some 1,500 volunteers take part in helping.

The annual porch-light campaign is Dec. 1 while street sales will take place Dec 12 and 13.

» In The News » Good times for Goodfellows