November 13, 2014 Comments Off on Goodfellows ready for milestone year In The News 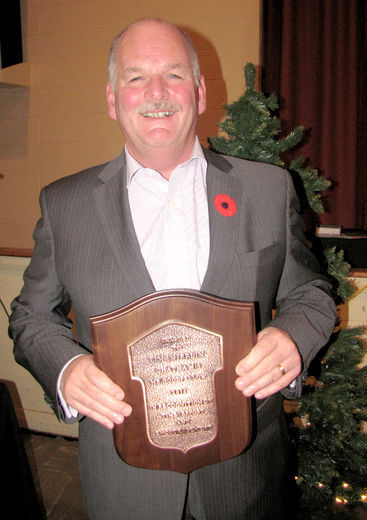 As members of the Chatham Goodfellows prepare for another Christmas season, they paid tribute to their long history of volunteer service in the community on Thursday.

The St. Joseph Parish Centre in Chatham was packed with guests as the organization held its 60th annual dinner meeting.

Tim Mifflin, who has been involved with the group for 34 years, was named Mr. Goodfellow 2014.

The retired police inspector said receiving the award is a great honour and noted the organization has a good legacy as it continues to instil its motto, “No Child Without a Christmas.”

“If you get an award … that is just added to the benefits that you derive from the volunteerism that we do every year,” said Mifflin after the banquet.

He is particularly proud of the work the Goodfellows have done to involve schools and young people in the Chatham area.

“That’s really what community is all about,” said Mifflin.

Current Goodfellows president Scott Williston thanked Mifflin for his years of service to the organization and for mentoring many of the members of the board.

Approximately 1,500 volunteers are involved in the effort to deliver food boxes and provide toys to children during the Christmas season.

Williston said they gave out more than 1,500 food baskets and over 900 toy baskets last year.

Another highlight of the evening was the speech by Williston’s mother, Mary, who shared the family’s story of helping the Goodfellows over five decades.

Demonstrating how one person can make a difference, she paid tribute to her husband Phil, who has now influenced four generations of the family to help out in any way they can during the annual campaign.

“I’m sure all of you have similar stories,” said Williston. “Your passion for the cause is not different than that of the Williston family. So on those cold, winter nights when you are pounding on doors asking for donations, ask yourself, ‘Can one person really make a difference?’ Our family, says, ‘Yes, it can.’”

While Dana Lovell told the crowd she was fortunate enough not to need the donations of the Goodfellows, that wasn’t the case for her father who was one of nine children and grew up with “little or nothing.”

As a way to honour their grandfather, Lovell’s children donate their Christmas money to the campaign.

Last night, they presented the organization with a cheque for $400.

Many past award winners joined the Goodfellows for their 60th anniversary, including Don Strong, who was named Mr. Goodfellow in 1966, and was one of the founding members of the organization in 1954.

As for this year’s events, the porch-light campaign is Dec. 1.

» In The News » Goodfellows ready for milestone year