November 28, 2019 Comments Off on Chatham Towing Services featured on reality TV show In The News 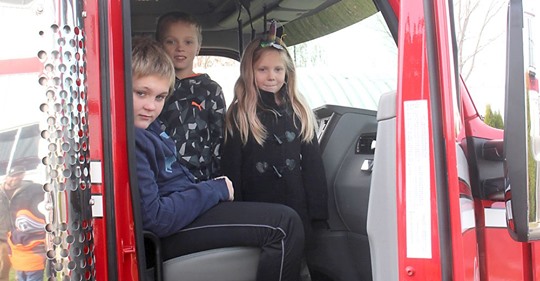 Verkaik, who has owned and operated the tow business for more than 50 years, organized the Chatham Towing & First Responder Community Event in Chatham Saturday at the company’s large Richmond Street compound.

The public was invited to bring a toy or food donation for a chance to see police, fire and EMS vehicles and equipment up close, as well as the large tow vehicles. Visitors could even go for a ride in a big rig around the compound.

Chatham Towing crews will soon be seen on Heavy Rescue: 401 when the new season of shows being airing in January on the Discovery Canada channel.

Verkaik said the local tow company will also be back for the following season, noting a film crew was on scene when Chatham Towing was called to clear a single-vehicle tractor-trailer crash on Highway 401 near Highway 40 on Nov. 19.

“It went very good,” Verkaik said of the first season.

He said a benefit of the show is the awareness it helps raise about the challenges involved for tow truck operators working on Highway 401.

“Right now, we’re noticing people know what we do and how dangerous it is because we’re working right next to that white line,” Verkaik said.

He added his crew is seeing more people slowing down and moving over when on the scene of a crash.

Terry French, who has only been with Chatham Towing fewer than two years, has arrived at an interesting time to work for the company.

He said it took some getting used to at first when the camera crew started showing up.

“But it’s to get out to the public what we actually do,” French said. “It does help show the dangerous part of it.”

Noting he’s only had a microphone on a few times, he joked there’s a “beep button.”

Jonathan Praill of Chatham, who attended the event with three of his four children, said  the event was a “cool experience” for his kids, giving them something entertaining to do.

He’s also a big fan of Heavy Rescue: 401 and will definitely be watching the upcoming season to see the Chatham crew in action.

“I just like that kind of stuff,” Praill said.

Verkaik was happy to see the first-time event was benefiting the Goodfellows, No Child Without A Christmas campaign that his company has supported for four decades.

“We don’t want to see a kid do without and thought this (event) will bring (people) in and bring in some donations,” he said.

Chatham Towing recently received the President’s Award from the Goodfellows.

Bonnie Regnier, a Goodfellows board member, said, “it’s just awesome” having Chatham Towing on board.

“They, a lot of times, do the extra work we can’t get other people to do,” she said. “They just hop in and help out where they need to be.”